The 3 biggest problems with Ringless Voicemail Broadcasting aren't what you think.

The biggest problem with Ringless Voicemail isn’t price. And I like a deal as well as the next guy. But if you spend hours trying to get the thing to work, any price concessions don't mean diddly. It's not breakdowns. Because you only get charged for certified deliveries, and everything else is free. And ringless doesn’t upset people like voicebroadcasting - So if you try to get through to somebody and don’t, they’ll never even know. Not a problem.

The biggest problem with Ringless: How intuitive is it to deploy.

I'm talking about a Steve Jobs type second nature interface here. How long to get it cranked up, make the recording, and write the script. (Because nobody wants to write and record.) How many messages got delivered and how often should I send the em' again? How compatible is the system with my existing outreach procedures?

At the end of the day, businesses have other things to do than mess with a lot of training on Ringless Voicemail. They want to reach folks in a particular time frame and be ready to receive callbacks to close the sale. That’s it. Everything else doesn’t matter. Except how much of a hassle it was.

Not just an inconvenience anymore, liability exposure can put you out of business. And to get the green light from your $400 an hour lawyer can be murder. Mention "voicemail" and "lots of them" in the same sentence and you've lost em', Now you're leaving a "trail," they say.

And Ringless providers run the safety gammet from very little; “Compliance with existing phone laws is our clients responsibility - We're just the supplier." To lots; “We’re very picky on who we accept to use our service, and will not hesitate to cut clients off.”

Ringless is ripe for a legal blow up. Much like voicebroadcasting with technology, e-mail with CANN-SPAM, and text through the courts. Any provider worth his salt (a lot of them came up through voicebroadcasting) is scared to death of the party ending. This polite, discrete, relationship technology being somehow banned. And the "don’t ask don’t tell" posture of the FCC isn’t helping. Regulators are scared if they endorse Ringless, providers and users will ruin it with ridiculous, aggravating cold call messaging. And consumer complaints will flow to the CFPB and other agencies.

If past vendor conduct is the FCC's chief decision-making indicator, they’re probably right not to touch Ringless. The FCC’s unsaid words: "Best to keep a little legal doubt in the minds of Ringless providers and users. Keep them not quite knowing what would happen if they mess up and cell owners get disgruntled."

Update 9/12/16: Litigator Scrub - eliminating the 90,000 previous DNC and TCPA court filers from your call lists has become an easy, cost effective way to hedge your bet here. Most fines and nealy all TCPA Class Actions are caused by professional consumer litigants that have sued before. Click here for more info on Litigator Scrub. 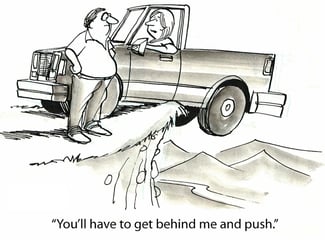 The first thing you find out with your Ringless campaign is lots of your phone numbers are regular old-fashioned phone lines. So you’re all excited because you have 10,000 leads. Your provider scrubs for cells, as ringless only works on cells, and your now half and half. So you have 5000 wireless. You start the campaign, and you find out that lots are “not deliverable.” This category is different than "not delivered". These numbers won't even be part of your successful message completion percentages.  This group includes: The number is no longer valid, it has too many digits, or it’s an international number. Something easily identifiable by the vendor.

Of the “potential deliverables” you get a report back that says, “Congratulations, you successfully delivered 2487 voicemails.” And you’re thinking, “What? Congratulations? That sucks. I wish I were still voice broadcasting to all 10,000 (except I don’t want to go to jail!)”

And you call the salesperson to complain, and he tries to cheer you up. “Hey, you know these cell owners actually have a pulse, they probably have some money because their voicemail actually works. And now you know you’re going to have to find other ways of contacting the rest.”

“But I thought this was going to help me take a deep dive into my cell inventory,” you say.

I come in contact with every type of Ringless provider on the planet. From Cheap, cheaper and cheapest - "don’t care about liability been in business three months," to "you need to qualify before working with us." We find ourselves gravitating to the biggest players in the game. In fact, most of the best-looking sites you see are resellers for the largest player.

And yes, we feel the Ringless market is in danger of a legal setback. In fact, that's our biggest fear. Not because of the system, but rather its misuse. Much like e-mail got regulated with Can-Spam,  texting through the courts, and voicebroadcasting via castration. Even if we're legally in the right about Ringless advantages: It's not a call, we don't touch the wireless system, cell owners don't pay. If consumers start to get upset with sloppy usage and execution, Ringless restrictions will follow.

The vast majority of TCPA violations today include some incomplete consent. (By "include" I mean that's one of the issues in a particular suit.) The second biggest legal uptick involves mini-TCPA State laws. Ringless has some advantages here. But users need to keep in mind, “informational messaging” doesn't mean it's O.K. to pollute the world with unsolicited borderline sass.

And providers, you need to give some real user guidance other than a link to the FCC's laws. Asking small and medium users to police themselves is a bit like giving your teenage daughter the car keys and a fifth of gin Saturday night and saying, “Be safe.”

But the biggest Ringless problems aren't what you think.